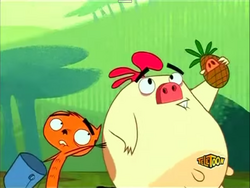 Bucket-Stick-Fruit-Ball is a game Peri and Entrée like to play.

The instructions are person 1 throws a swineapple at person 2 and person 2 has to hit the swineapple into a bucket behind person 1 with a stick. (This is optional) And person 2 can ride a Tricycle or any bike to Catch the Swine apple it the bucket on their head. If there's 3 People playing, One of the players has to be a "Foward Bucket Chucker". Person 1 has to throw the Swineapple to The Foward Bucket Chucker. They have to Try to catch the Swine apple with the bucket. if they miss, Person 2 Has to chase the Foward Bucket chucker with a Tricycle.

The In No Play For Princess, Two-Legs Joe states that last time Peri and Entrée played this game, the world was going through dark times, as Entrée sleepily says "good times...".