Spliced! Keep Away Wiki
Register
Don't have an account?
Sign In
Advertisement
in: Characters, Males, Minor Characters,
and 3 more

Eduardo is one of the minor characters in the show. He is a stereotypically handsome mutant with the body of a puma and the legs of a rooster. He has long black hair (which is actually a toupee), a big and muscular torso, and wears a blue speedo with a yellow stripe.

Eduardo is friendly, talented, and benevolent. He also seems to have a self-centered side to him, like at the end of the episode Amazon, where he sang a song about himself and complimented his own looks.

Eduardo having drinks by the beach with Patricia

Eduardo singing his song at the end of Amazon 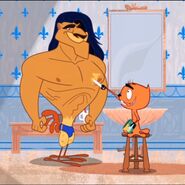 Eduardo getting his chest waxed by Peri

Eduardo seen surfing by Peri during his sugar rush