Spliced! Keep Away Wiki
Register
Don't have an account?
Sign In
Advertisement
in: Article stubs, Characters, Main Characters,
and 4 more

Fuzzy Snuggums was a mutant who lived on the island with the other mutants. He was a small yellow furry creature that liked exploring. He is usually the target of Peri and Entree's bullying and mean pranks, but he can resist them and brush them off.

It was revealed by Two-Legs Joe that a long time ago, the Mad Doctor chose him and Octocat to become super soldiers when he felt threatened by the robots on Robot Island.

After seeing that Fuzzy would be hard to handle in that state, the Doctor later conditioned him to study exploration. However, he would revert back to her super-soldier form if he was exposed to certain explosions (e.g. attached to fireworks when they go off).

He is in search of Amazotopia (parody of Amazonas and Atlantis), which is meant to be like the regular continents of our world, like North America, South America, Asia and Australia (all continents that border the Pacific Ocean.

When Fuzzy felt upset due to his exploration attempts failing, Peri and the other mutants made the island look like the famous land which was Fuzzy's goal of travelling to. They disguised as Amazotopians named Boxatron 800, Patramalama ding-dong, Hoselord Zunglefish and Stinkyhead Bignose. Anytime he does something after he's done it, he will typically say "Expedition Note: [any number of phrases here]". He sound like a high-pitched voice when he talks. His goal is to reach Amazotopia in (Fuzzy's Great Adventure). He ended up getting hit by a plane, landing in space, getting roasted into cooked meat, and possibly more. In Best Before Date, near the end of the episode, he used a wrench to beat up Entrée for what he wrote about him in his diary (though really it was Peri in a costume of Entrée), and was helped by Joe, Princess Pony Apehands and Patricia

This article is a stub. You can help Spliced! Keep Away Wiki by expanding it. 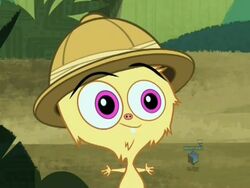 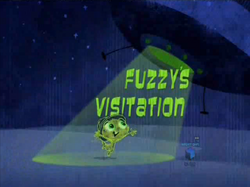