Mister Smarty Smarts is the main antagonist of Spliced. He is a mutant who took on the role of an evil genius. His minion and closest confidante was Octocat. He lives in his lair on the slope of the island's volcano with his friend.

Although he is shown to be incredibly intelligent, he is illiterate, and keeps that fact secret from everyone except for Octocat.

He hates candy because the sweets have a "pleasant" taste. (Sugar Low). However, he does enjoy ice cream sundaes (Of Minions and Masters).

Smarty Smarts is shown to use Entrée, Peri and their belongings or items they use for fun when he deems it useful for his evil schemes (for example, Peri's butterfly wings that charm/hypnotize people who look at them in Nobody's Cult But Mine, Peri and Entrée taming Princess Pony Apehands).

In episode 18, when Octocat left due to his verbal and costume abuse, he used Claw-o-patra (a parody on Cleopatra), a robot with clawed hands seen earlier in episode 17, as a stand-in minion. She turned rogue and took over, until Octocat managed to destroy her at the end.

Several of his diabolical schemes against the town were: 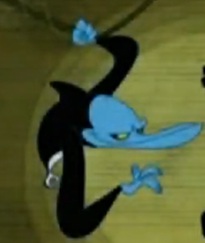