Peri (short for failed exPERIment number 13) is one of the main characters on the show. He is a mutant species unknown, (except for butterfly, which is evident in the episode Nobody's Cult But Mine.) It is unsure what his purpose is, much unlike every other mutant, who knows what their intended purpose is. There was a file on what Peri's purpose was but Entrée flushed it down a toilet before Mister Smarty Smarts could read it to him.

Peri is sweet, cute, helpful, kind, silly, funny, carefree, childish, and also very loyal and responsible. But like Two Legs Joe, he gets easily annoyed and has a bad temper. However, his anger and have a bad cold or a fever and maybe a Temperature can lead himself and others to trouble (as seen in Poosh and the Quest for the Blargy Parble and Nobody's Cult But Mine) but he's still a great friend to have no matter what.

His body is extremely elastic, as shown in a few episodes. In the episode Stuck Together, Peri is seen holding onto things with his own tongue in need of desperation. It seems to be extended and bendy. In the episode Nobody's Cult But Mine, Peri grew butterfly wings, and later in the episode, after saving Entrée from falling into the volcano, he burnt his wings and grew a gumball machine from the top of his head. He is a skilled singer, as is seen in Stuck Together and Honorary Freak. In Sugar Low, he can make everyone go very slow while he goes really fast by eating so many sweets and he is also good at knitting, fixing cars, and baking and is also an expert climber.

His home is a passenger plane that crashed on the island.

He enjoys bowling and a wild improvised game called "bucket-stick-fruit-ball" that always ends with someone being hurt. He also enjoys a game called "poke the mayor" which involves Peri and Entree poking Two Legs Joe with a stick.

Peri is often seen best friends with Entrée. They often get into fights and mischief.

Patricia has shown love interest in Peri. Such actions include calling him cute.

Peri once briefly had Octocat as his minion (but apparently treats her like a friend) while he was fighting with Mister Smarty Smarts.

Peri once had a pet buppy named Pistachio. 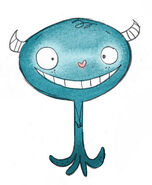 I miss my best friend...

Peri is so cute... In an alien costume 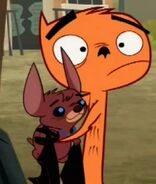 The love of my life!

Peri #1
Add a photo to this gallery

Add a photo to this gallery
Retrieved from "https://spliced.fandom.com/wiki/Peri?oldid=7862"
Community content is available under CC-BY-SA unless otherwise noted.