Spliced! Keep Away Wiki
Register
Don't have an account?
Sign In
Advertisement
in: Characters, Species, Bad characters,
and 4 more 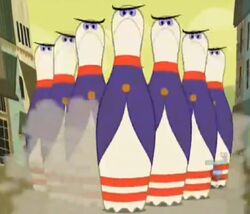 Pinnians are a race of extra-terrestrials whose appearance is similar to those of bowling pins. They are led by a leader who can be distinguished by the crown on his head and his royal trappings.

In Bowled Over, when the Pinnians attempted to invade the mutants' island home, they noted their resemblance. The mutants tried to convince the dispirited Peri to take up bowling again in the hope that his skills could help defeat the Pinnians, who had enslaved the mutants. After reclaiming his bowling bowl from the island volcano, Peri literally bowled the alien invaders over and foils the invasion.