Spliced! Keep Away Wiki
Register
Don't have an account?
Sign In
Advertisement
in: Characters, Minor Characters, Males,
and 9 more

Wunny Sharbit is a X character in Spliced!. He views all of the characters as his prey. He has a chainsaw-like mouth, which makes the other mutants terrified of him.

In My Fair Shark Bunny, when Peri traps him in a jar in the Doctor's lab, Peri discovers that the jar contains a translator that allows him and his friends to understand the Wunny Sharbit. Although Peri was trying to teach him that friends are not food, despite the initial good promise of success, it eventually becomes a disaster.

In Compu-Peri, he has eaten a buppy named Pistachio, as well as a Slouch Potato in Roots.

The Wunny Sharbit is a mutant of a bunny crossed with a shark and a chainsaw. They appear to be cute, but they can get violent. 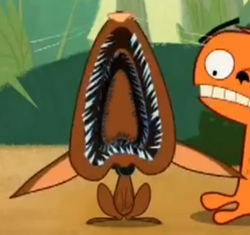 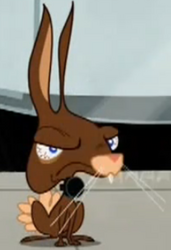 Wunny Sharbit with his voice translator
Community content is available under CC-BY-SA unless otherwise noted.
Advertisement